No Comments
Music In Games
1/9 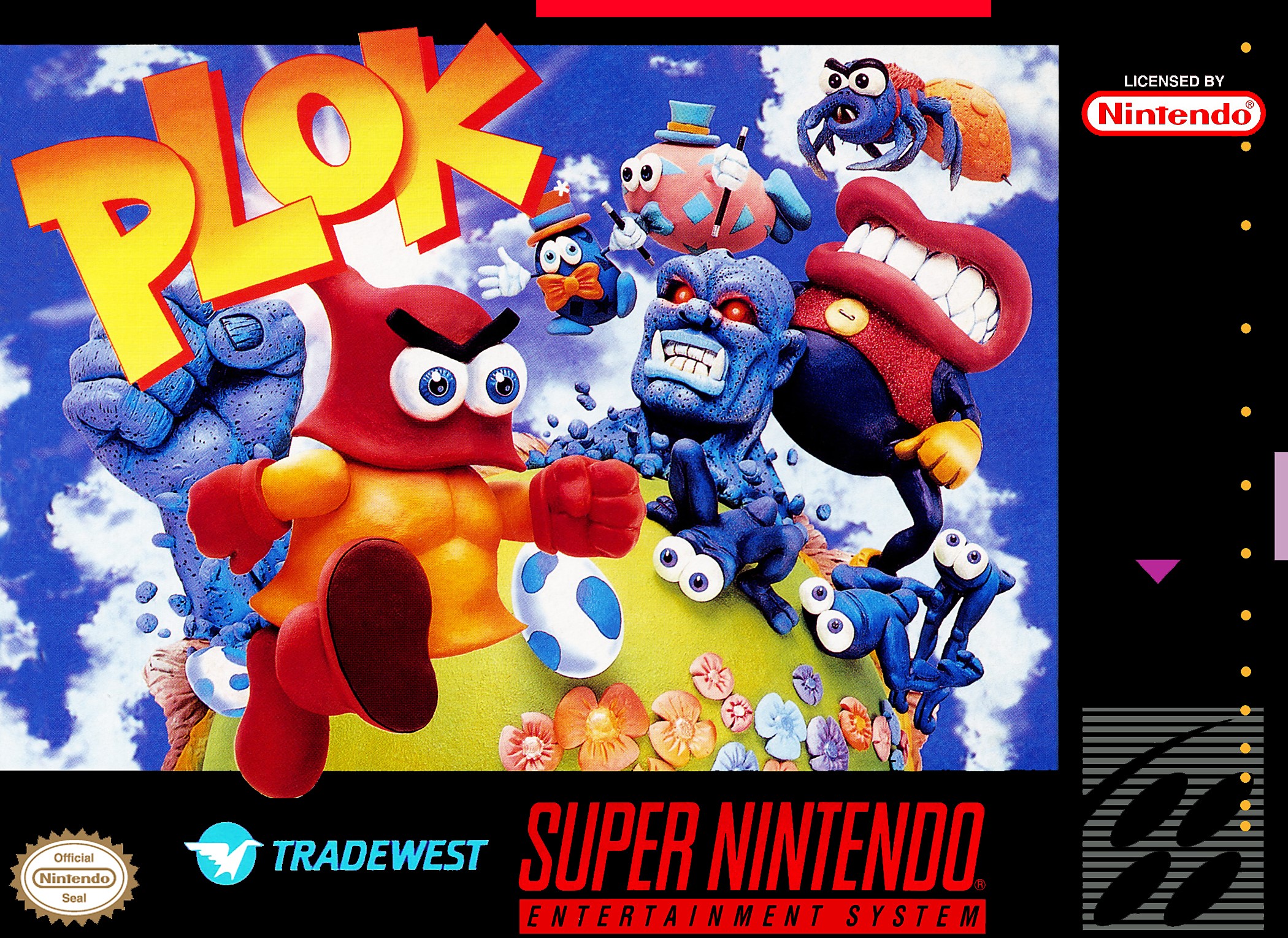 I’m from St. Louis, Missouri originally – North County, more specifically, a few stone’s throws away from Ferguson – and during my childhood I would regularly pester my mom to rent games from the nearby TV and appliance store. They happened to have a pretty good selection of games and even systems (I rented a Panasonic 3DO from there more than a few times – don’t judge), so it was a real treat to head in and see what they had on offer.

I was a Nintendo kid, so during the Super Nintendo era I would regularly try out a number of different titles – from classics like ActRaiser, Street Fighter II, or Rock ‘n Roll Racing, to weird titles like Michael Jordan: Chaos In The Windy City, to just plain awful games like Rise Of The Robots. This place had them all.

And then, one day, this box caught my eye:

To this day, I’m not really sure what convinced me to pick this one out of the motley selection of games at the rental shop. Maybe it was the short, inexplicably aggressive name (Plok! PLOK!). Maybe it was the bright colors that drew me in. Maybe it was the August heat wave melting my brain. Or maybe, I just had to pick something otherwise I would go home with nothing. So, Plok! it was, then.

One of my childhood triumphs was figuring out how to connect my Super Nintendo to the wall-consuming stereo system and turntable my mom had gifted me from the basement, complete with two full-range speakers that just barely accepted RCA inputs. It was a fantastic excuse to crank up the sound on any game worth the trouble, but I was a little hesitant about how Plok! would fare. The game, while intriguing, seemed a bit too cute to bellow throughout the house through my system. Upon powering the game up, however, I was greeted with the theme music and no other audio, gleefully consuming all 8 channels of the Super Nintendo’s S-SMP to blow my socks off with this:

Uptempo rock/blues! Guitar solos! Horn sections! Holy nuts, what didn’t this song have? It was a fantastic way to burst on the scene and attempt to set the tone for what, admittedly, is a very strange game. While this music is playing in the background, you are introduced to the premise after hitting Start. Here’s a quick rundown:

Plok is a small man made out of felt who lives on the island of Akrillic. He loves flags (don’t we all?), and uses them to mark his territory on the island. One morning, however, he discovers that the big flag over his house has been stolen, and spots the perps heading over to Cotton Island, so he dashes off in pursuit. His main mode of attack is firing his arms and legs at enemies, and they boomerang back to him once their job is complete. He won’t stop firing his limbs until he gets his flag back, and once that happens, the real game (and, incidentally, soundtrack) begins.

It sounds a little odd, right? It’s odd in that wonderful 90’s video game industry way, where everyone’s trying to staske their claim in the wake of Mario and Sonic. One look at some gameplay and you too would question why I decided on this game when I could’ve gotten Zelda or Final Fantasy or something:

And yet, onward I played, driven by the fantastic soundtrack that was laid out behind this crazy, colorful world. This track in particular, which plays on every stage on Cotton Island, has a standard amount of whimsy but tinges it with several twists and turns that keeps me in suspense, yet drives me to action to finish the stage and find out what’s next. In my opinion, though, it really is a feint; once you get your flag back and depart Cotton Island, then the music starts to get very interesting.

Upon returning to Akrillic, the first track you’re treated to is a bright, airy, synth-y number that’s big. It really impressed upon me that the game was beginning to open up and I’d start to see more interesting locales and more challenging gameplay. An adventure was about to begin! Let’s take a look at a selection of my most memorable tracks from this game:

The music isn’t locale-specific (e.g. having a Middle-Eastern sounding tune in a desert stage), but I’ve seen this first track on Akrillic called the “Beach” theme, on account of a beach stage being the first time it was played. The synth chords give me a sort of a Miami Vice mentality along with the rippin’ guitar solo towards the end, but the composition overall is way more effort than I would’ve expected out of almost any game, let alone this one:

It’s a twisting, turning, wonderful journey of a song, with more sections than your typical video game tune. I particularly enjoy any kind of song that is more of a journey from A-Z rather than a verse/chorus or A-B-A-B section kind of affair, and this song definitely hits the mark.

The stellar soundtrack doesn’t stop there. Another one of my favorite tunes from this soundtrack is featured is “Akrillic”, featured in a couple of the more urban city-type stages in the game. It puts me in the mind of a 70’s style prog rock track you might’ve heard if Wishbone Ash and Yes produced an album together – winding sections, beautiful melodic/harmonic patterns, and incredible breakdowns make this song an incredible journey in songwriting, particularly for game music:

The bass line particularly gets me; I’m primarily a bass player, so I tend to pay extra attention to bass lines, even in video game music. This one is, in short, a winner. It drives the song along, letting all the other instruments sit above with plenty of room to expand and explore interesting harmonies and textures. Again, another musical journey that I love to embark on.

“Creepy Forest” is a bit of a feint; it begins exactly how you’d expect a song for a creepy forest to begin, with lots of dissonance and low, ominous pads to bring up the suspense level. However, once you hit the mid section, it breaks down into another 70’s style soft psychedelic rock affair, like something you would retreat to the green room for. It’s a big sidestep from the rest of the tune and makes it wonderful to sit back and listen to despite its rather milquetoast beginning:

I’m not particularly fond of the stages this theme is in, but I press on through those stages mainly to hear this awesome tune; the mid section just really brings me back to earth, and I love it. In the end, I believe the mark of a great soundtrack is to enhance and uplift the game it’s serving, and the soundtrack for Plok! is doing some great work.

Finally, my favorite track from the entire soundtrack is called “Plok’s House”, but I mainly associate it with the “Venge Thicket” stage. It is another musical journey, but a decidedly more upbeat one – fast tempo, busy bassline, and lots of wonderful synth lead melodies. What I particularly love about this song is the production value and arrangement; there is a lot of fading in and out of different tracks (remember, they only had 5!) in order to transition from one part of the song to the next, and it really serves to add movement to the entire piece rather than just smash cutting from one section to the next. The chord structure as well is really interesting and creative, not your typical harmonic structure that you would find in your typical Mario song:

This is the one I slave over on bass to try and learn (still learning – this one is tough!) because it is so interesting. The whole piece has so many layers and intricacies that it really stands out as my favorite against the other songs in this already unique and varied soundtrack.

How did this happen?

Tradewest, as a publisher, had done a lot of great work with regard to music in their particular games, notably the Double Dragon, Battletoads, and Off-Road series of games. But Plok! is, to put it simply, a cut above anything the company had done. The creative nature of not only just the music, but how the hardware was used to produce it, was something rarely seen in many video games of the time.

UK-based brothers Tim and Geoff Follin from the game’s developer Software Creations composed and sequenced the soundtrack, really able to push the limits of the hardware by incorporating low quality samples (like guitar chords) and pitch-shifting them to fit the chord structure of the song they were currently working on. Folk-rock and old RnB influenced the songwriting, and the powerful sound chip of the SNES allowed them to spread their wings and really get creative with arrangements.

Tim Follin has an especially decorated resume in the game composer industry, particularly throughout the 80s and 90s. Some of his highlights include soundtracks for Ken Griffey Presents Major League Baseball, Ghouls ‘n Ghosts for the Amiga, the aforementioned Rock ‘n Roll Racing for the SNES, Super Off-Road for the SNES, and Spiderman and the X-Men: Arcade’s Revenge for the SNES. Many of his influences include Deep Purple, Jethro Tull, and John Martyn, and from what I’ve heard of the soundtrack for Plok!, it’s safe to say those influences come through pretty strongly.

Overall, if you are looking for an incredible soundtrack from the SNES era, Plok! should be on your list. A number of other folks thought so as well: the soundtrack has received two limited-edition physical releases in the past 3 years, and it consistently makes lists of soundtracks to take a listen to in the gaming world. For my money, it has definitely influenced my own songwriting throughout the years, and it was a welcome respite from what I expected from a video game soundtrack. I’d say it has a bit of cult status since the game itself wasn’t as popular as some of its peers, but it has been championed by those of us who, like me, were lucky enough to spot it in the corner of their local rental shop and decided to give it a chance. Take a listen: